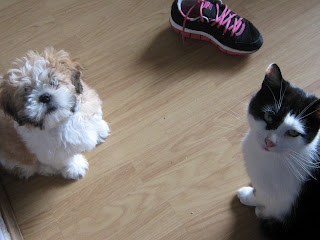 I'm sure you all remember Shallot, the gayest of cats. Well Shallot is still with us, ageing gracefully, and still the queen of the house. But TDT wanted more cuddles, and has always wanted a playful pooch. So, it was last July found us heading an hour north to meet and greet with a new puppy. We met a couple, the first born, a little lard-arse who was fast asleep, and the runt, who was unsteady and tiny. After weighing up the pros and cons of each, we plumped for the plump one. He did nothing but sleep whilst we were with him, so when it came to names one of the bigger choices was "Chilli" because he might have been chilled all the time. I was tempted with "Syndrome" (and just hope he doesn't jump up on anyone) or "Minton" (who would have to be good all the time), but we were discussing musicians and suddenly it hit us. He's Brown. You can't call a dog "James" but "Jackson" definitely had a ring to it. So, if he was chilled out on the day we collect him, he'd be Chilli, otherwise Jackson. The journey home named him Jackson.
Jackson is the apple of my eye. He follows me everywhere, and sleeps at my feet. He also has taken a leaf out of a few thousand prisoners of war, and repeatedly makes escape attempts. These can be simple affairs, like dashing for the front door every single time it's opened, or complex plans involving half chewing tethers in the back garden and then yanking them to make them snap and disappearing for the bones of 3 hours. The funny thing is, each time he successfully escapes, he mills around outside for a second as if to say "ok, now what?"
One thing is bothering us. He's 8 months old, and still growing. He's a Shih tzu, and so should be a small bouncy pooch, but already he's a lot bigger then other dogs of the same breed, and from what we can tell of his feet, he hasn't finished growing yet. His hair is also a problem. I know the hair is to keep him warm, but as his hair grows, he turns into Rastadog, with huge mop not that different from the dog in the Jamie and the Magic Torch. This means he a) is very heavy when he jumps on you to tell you to wake up but also b) he adds to the weight just by growing his hair. If he doesn't calm down with the growth spurts soon, we'll be needing a winch to lift him.
His biggest problem is chewing things. He chews everything he can lay his paws on, and is particularly bad when we go out leaving him on guard. We return to find he's chewed glasses, cables, small cats, settees and the next door neighbour's favourite kitchen appliance. It's like he doesn't want us to go out. The alternative is to take him with us. He gets all excited about the prospect of a trip to anywhere, but then gets in the car and whines because he doesn't like the movement. He is good at getting in and out of the car however, and simply goes to sleep for journeys anywhere. 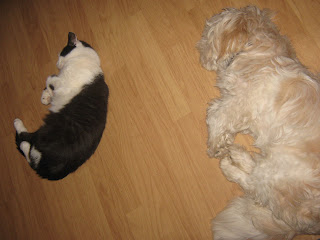 The best thing is the fact Shallot tolerates him. Only yesterday saw them both lying in front of the fire, in exactly the same positions, doing the pet equivalent of spooning (a foot apart). Shallot has a look of "Oh Gawd, not you again. Pester me to much, and you shall meet my claws of doom," and knows that he will get bored quickly and move on. Either that, or he'll keel over and conk out.