One wedding and a funeral

And so, TDT and I headed off to the land of sun, sea and Sangria for Barbara and Eddie’s eagerly awaited wedding. Barbara is one of TDT’s best friends, and so we had to show ourselves, and it was also a perfect opportunity for a holiday to the small town of Nerja in Spain. We’d had loads of warning, and had booked months in advance to a small apartment on the outskirts of town. The day after TDT’s birthday we headed out courtesy of an exceptionally early flight with Ryanair (“would you like a seatbelt? That’ll be €5 please”). The only cloud over the whole thing was poor Eddie’s mother had been poorly, and might not make it to the wedding. 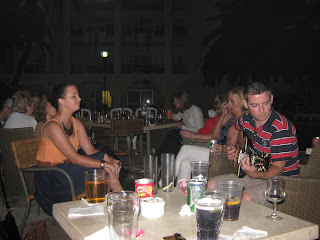 The night before the big day saw us all meeting in the evening for drinkies and a sing song. The bar closed at midnight, so the drinkies were supplied by two of the wedding party’s guests with access to the poolside from their ground floor rooms. As we sat there, listening to one delightful song after another, and quietly chatting away, apparently the flood of calls to reception from the resident ‘saga louts’ was in danger of overwhelming the night watchman. We eventually left just before 3am, under protest.
Monday morning saw us arrive at the chosen venue for the wedding, a large hotel on the seafront. The women all had summer dresses on, whilst us poor men had been suited and booted, and were sweltering away at the bar. Much San Miguel was required. The condemned man was flitting around, looking surprisingly composed for a man about to take one the largest steps in his life. Sadly his mother had passed away only a few days before, and the rush of a funeral and burial had meant that he was presumably running on ‘autopilot.’ Everybody was fussing around him and the bride was in her room, consoling her bridesmaids who were all crying. Barbara, being the sensible serene one, was just getting on with the day. Her sisters, meanwhile, were making the Mediterranean saltier.
Just before 3, we got the call to a small covered altar on the edge of the beach, where Eddie was standing, now looking decidedly nervous. About 100 guests, from as far afield as Alaska and County Kerry were sat in three groups, the bride’s friends, the groom’s friends, and family in the middle. Suddenly, a gasp was heard over the sound of the waves and hot wind, as a beautiful Barbara appeared on her father’s arm, walking down from her room. All the women started blubbering, like women do, and Kleenex could be seen dabbing many eyes behind Dolce and Gabbana sunglasses. Barbara’s cousins Brian and Ailish would sing a sedate song as she walked down to face Eddie in the sea breeze. The priest was a strange druidian-looking gentleman, with a very well educated (see: posh) English accent. Eddie’s mother’s seat was taken by his aunt instead, and his father was as shell shocked at such an emotional event. The priest had a candle lit for her, but the sea breeze was determined to blow it out. The ceremony was unrushed and unflustered. The priest described how traditionally the Spanish couple would leave the altar, go to their room, disrobe, and Eddie would perform his “marital duty” whilst the entire congregation would file past, and if they approved they would leave a gift of money. They had declined this tradition though, and preferred the more traditional Irish celebration of much alcohol. 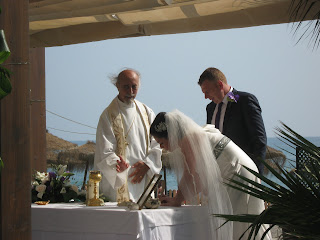 Whilst they went off to the hills to have some photos taken, the rest of the party were treated to free bar involving more San Miguel, Bucks fizz, red or white wine and canapés. The first canapé was a rather tasty spinach quiche. The second was an even tastier mozzarella croquette thingy. The third was met with horror as small pastry cases filled with blue cheese were handed out. People could be seen discretely spitting them back out, or swallowing the small taste of feet before trying to subdue it with more alcohol. I’m sure more than one person was sickinnahedge. The poor waiter could be seen walking around with two or three trays of the nasty things. I personally like blue cheese, but after the fourth one my cheeks were itching so badly inside my mouth I had to stop eating them. The newly married couple returned for more photos, taken with close family, distant family, friends, distant friends, family and friends, distant family and distant friends, barmen, waiters, photographers, a small Spaniard who’d been hanging around all day, and finally everyone. Then we adjourned to dinner. The menu was a delightful mix of both meat and veg. The veg was for the starter, the meat was the main course, done on a large open pit barbecue. Everyone was catered for with the buffet starter format, and the large platters of chicken, steak, gammon, tuna and trout (I believe) were more than welcome to accompany it all. Basically, I ate too much. The couple of the moment were called to the front to cut the five tier cake, with a large sword. More surprisingly, they are allowed to take this sword home. I’m presuming it’ll get a pride of place on view at home.
The speeches were an emotional affair. Obviously with the loss only days before, Eddie was unable to say much. His brother had to pause, gulping back the emotion of what everyone else was feeling. There wasn’t a dry eye in the house as people raised glasses to Eddie’s Mum, and then to the new couple. Barbara went up and gave a highly composed speech (quite how, I’ll never know), and then we were all asked to step outside for a nice surprise. As we disgorged ourselves onto the now cooler sand, a large group of white helium balloons appeared, and we were all given one to hold. Once everyone had one, Eddie’s father was given a purple one to commemorate his mother, and let it go first, then seconds later we all let ours go to show our thoughts were with her. We all watched in amazement as the 100 or so balloons headed skyward in more or less the same pattern they were released. It must have taken over 15 minutes for them to disappear from view, and it was a fitting memorial to such an occasion. 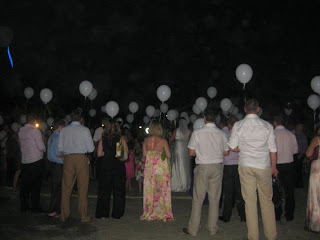 Returning to our tables a Northern DJ came on ready to party. He had the unusual act of also singing, and soon the dancefloor was full with women dancing around handbags. Suddenly one of Eddie’s brothers was called to the front of the floor, with a surprise for the newlyweds. He’d been practicing playing the guitar and was going to play for them. He did however need accompaniment, and asked Barbara to join him. She was given a Ukelele, and the DJ started to play “Duelling Banjos” from the film deliverance. Obviously, they were both miming, but both enjoyed themselves as they submerged themselves into the role at hand. Even Barbara’s Mum was heard saying “I didn’t know Barbara could play a guitar!”
After what seemed like half an hour, but was in reality about 4 hours, we moved from the now cool beachside bar into the hotel’s air-conditioned function room, for more dancing and drinking. Most people were now getting merrily sozzled, and within three hours the bar had run out of vodka and whisky, and was on the verge of running out of beer. They closed the bar at 3, and the lights went on. The problem with this is that the Irish don’t like to take this as a hint maybe it’s time to go home, and again the singing started. A few of the less hardy (myself included) were dozing, but even Barbara’s father joined in with his now married daughter sat on his knee. Eventually the bar manager, almost at the point of tears, begged us to leave. So we all went outside to the front door, and took in the nice cool air and atmosphere whilst we waited for a taxi home.
I won’t bore you with the rest of the tales of the week, but needless to say more alcohol was consumed. In fact, by the time TDT and I returned home, we were both in danger of needing new livers.
Maybe next time it’ll be a venue for our wedding…
Posted by Rik
Newer Post Older Post Home
Subscribe to: