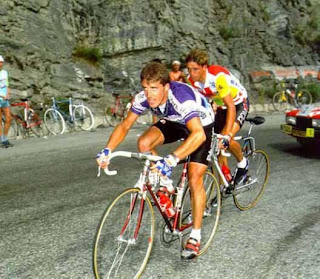 I have to have a rant. As a hardened cycling fan (and past participant) I know how drug addled the sport of cycling can be. In 1967, one of the most prominent and promising cyclists (who'd worn yellow in the tour only 5 years earlier), Tommy Simpson died on Mont Ventoux, after taking a positively obscene amount of painkillers. He was so passionate about his sport, he took so many pills that he had a heart attack. It was about then that people started to note how much of a problem drugs (be it illegal or otherwise) could be.
My personal first witnessing of drugs was the great cyclist Pedro Delgado, who went on to win the 1988 Tour. He was proved to be taking a drug that was (amongst other things) found to hide steroids. It was outlawed after the fact. Horse, bolted, all that.
The whole thing at the moment is Lance Armstrong, in my eyes possibly the greatest cyclist the world has ever seen before or since, and his admission to taking illegal substances. Don't get me wrong, my admiration for cyclists goes a lot higher to Greg Lemond. He was shot in the back by his own brother, and 18 months later won the Tour with 9 seconds in hand. He went on to win it, 3 times. In 2001 LeMond gave a less than preferential interview on how the US press were victimizing Armstrong and his less than clear cycling pedigree.
Let's zoom forward 5 years from Greg's last win. Lance won his first stage on the tour, following a *really* bad day where Fabio Casartelli had a crash on a descent 3 days earlier. He made a big play of how he won it for Fabio, not himself or his team.

Lance won "Le Tour" 7 times.  He's yet to outline what the illegal substances were, how they were taken, why they beat the drug vetting procedure, how they beat the drug vetting procedure, why he did it and when he did it. But, what with that, and the other team mates (See: jealous other cyclists who'd do anything to make themselves better than him, aka competition) testifying against him in a judicial case run by Australian's favourite marsupials, better known as the world's press. He was examined and checked 11 times (note to self: if 2 is double, and 3 is treble, what is 11?) and proved to be clean by the press (not the World's Cycling Federation). He finally said "Do you know what? F**k it. Let them say I did it. Maybe they'll then leave me alone." And did they? No, the snowball was now rolling, and gathering speed. He is currently at the face of a large tear-infested, I-feel-sorry-for-my-son avalanche that is completely unproven. Don't get me wrong. If tomorrow he explains how he beat the half a dozen or so independent drug testing facilities who didn't know his sample from Adam (or any other cyclist), the strict control on each and every day he was in yellow, and not once did someone forget to replace the sample with another sample with his hormone levels based upon his exertion on that day and how the temperature/humidity/inclines would have affected his testosterone level. And this from a man who technically could only produce only half the level of testosterone. If he had appeared in court, one appearance would have been enough, but by law you can't be judged twice. The press says otherwise. Now tell me he's guilty.
And more importantly, tell me how.
Posted by Rik
Newer Post Older Post Home
Subscribe to: