On walking the bad line. 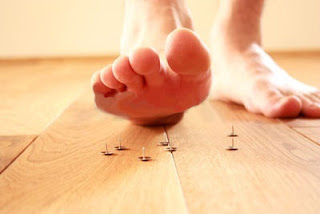 So, early yesterday morning, I trod (as you do) on the pooch's hair brush. It hurt, but not so much as to make me cry out. I actually heard myself say "coulda been worse. Coulda been a lego block." So, what about if you have a scale of 1 to 10 for severity of things to step on. Maybe you could elaborate on the list below...